When my oldest was born I had never heard of baby led weaning (it's a bit of a redundant theme in my posts), so we did all the standard spoon fed purees and slowly introduced chunks. Because of his bad kidneys my second didn't really eat anything until he was 1 so he only did chunks and he self fed right away. 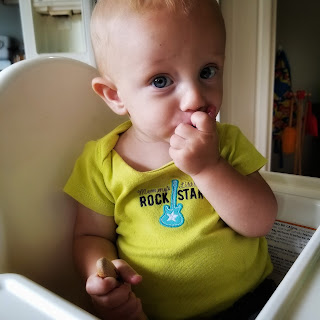 And then came my third child, I made 1 puree and he really disliked been spoon fed so I gave up, let him have the spoon and started from scratch with baby led weaning (BLW) at 6 months. It is so much easier then purees (very convenient with a 3rd child) and at 10 months he eats pretty much anything I give him and the same as us.

Although different from the Montessori approach to feeding, BLW is popular with people who are Montessori-inspired for several reason:
it is child-led
the child has the freedom to self feed, and it is one of the first independent self care act they perform
the child can stop on his own when he is full, therefore learning healthy habits of not overeating 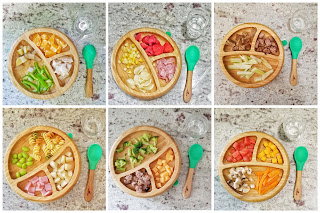 What do they eat?

Pretty much the same as us, but with no seasoning. I cut it in little chunks or long strips so he can grab the food.

Also I want to mention regional differences: my first 2 were born on the West Coast and I was given a list of 20 items to not give until 1 year old and a shorter list to not give until 2. We are now in the South and I was told he can have anything starting at 6 months (except honey, wait until 1). So even though I was given much more freedom with my third boy, I'm still not as adventurous as I could be. 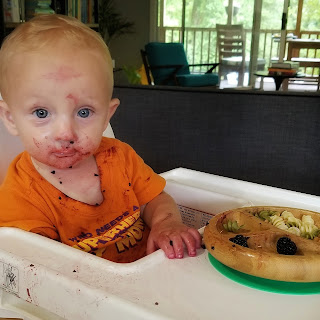 Where do they eat?

In our case he eats at his high chair because he eats all his snacks and meals with us and we eat at the table. If you want to be purely Montessori he would have to eat at a weaning table but we feel he should sit with us. My oldest, Alex, did have his own table next to ours.