Yesterday, Matisse turned 4; in October, Theo turned 1; in September, Alex turned 6. With all their birthdays I have been looking at baby photos and rethinking about their births. I thought I would write them all down to keep the memories and share (if anyone's interested).

All 3 of my birth stories are very different. From a first traumatic birth, to a second easy healing birth,  and a last medically complicated pregnancy and delivery that still was very empowering. I learned that your birth team, your education and your mindset are all very important to get the delivery you would like. I had a very typical pregnancy, all day morning sickness in the first 15 weeks and then an uneventful pregnancy except for a baby measuring large at the ultrasound. At 39 weeks we agreed with the doctor that we would induce at 41 weeks if he was not born by then. So on week 41, at 6 am, I went to the hospital a nervous wreck as scheduled. There I was right away put on pitocin, no other prep like is usual, nothing. It was pretty slow at first until the doctor broke my water. Then, without telling me what she was doing she placed a fetal monitor on Alex's head (which is kind of screwed on the head of the baby, it fell out 2 times as he had too much hair and he had a screw mark on his head after the delivery).

After the breaking of the water the contractions came in strong and fast and after making it to 6 cm I decided to take the epidural. Then things slowed down until the time to push around 6 pm. I had let the epidural lapse a bit so I could feel my feet a bit but the pain was bearable. Eventually the epidural was gone and I was able to go on my knees, which really helped with my large boy. The doctor was very nervous, pacing back and forth, in and out of the room, and really no use. She had 2 students with her who were much more helpful and supportive.

At the 2 hour mark she decided it was time to get him out. Without really talking to me she had me go back on my back, a flurry of people entered the room and she gave me an episiotomy and pull him out with a vacuum. To this day this is the worse pain I have felt. That gave me a 3rd degree tear that was painful for weeks. I sat on a boopy pillow for a month (yay for nursing pillows!) and I am thankful for the lactation consultant at the hospital who taught me to breastfeed lying down.

After the delivery the doctor told me she was expecting a C-section because he was a large baby. Then when I mentioned that things were not feeling right at the tear she answered "well you had a baby, what were you expecting". From this I learned to carefully pick my birth team. 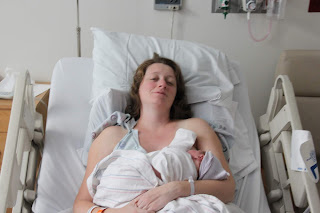 For Matisse I changed doctor and hospital. I picked one of the only 2 doctors in Las Vegas that did VBAC as he was the most natural friendly doctor. I also hired a doula who was a midwife in training.

I had an even easier pregnancy with Matisse, no morning sickness, nothing! At 41 weeks we agreed to induce again, but with a balloon instead of pitocin. I was told it does not always work but it starts labor in 25% of cases and it it does not involve adding hormones to your body. The balloon was installed on the 16th at 10 am and I was sent home.

I went to bed and woke up at 2 am with some contractions. I went to the bathroom, the balloon fell out which meant at was a 3 or 4 cm already! I tried to go back to bed but coul